If you visit Paris, one of the most impressive attractions you could see is the famous Cathedral Notre-Dame de Paris, which is not only a religious destination but also a place of great art and unequaled history.

Notre-Dame de Paris (French for “Our Lady of Paris”), also known as Notre-Dame Cathedral or simply Notre-Dame, is a historic Catholic cathedral located on the eastern half of the Île de la Cité in Paris, France. Being considered to be one of the finest examples of French Gothic architecture, the Cathedral is among the largest and most well-known church buildings in the world. The beauty of its sculptures and quality of its stained glass are in contrast with earlier Romanesque architecture.

The cathedral’s treasury is well known for its reliquary which houses some of Catholicism’s most important relics including the purported Crown of Thorns, a fragment of the True Cross, and one of the Holy Nails.

The Notre-Dame de Paris was among the first buildings in the world to use the flying buttress (arched exterior supports). The building was not originally designed to include the flying buttresses around the choir and nave but after the construction started to show signs of stress fractures as the walls pushed outward, the cathedral’s architects built supports around the outside walls, and later further additions.

A multitude of individually crafted statues was placed around the outside to serve as column supports and water spouts. Among these are the famous gargoyles, designed for water run-off, and chimeras, statues that were originally colored as was most of the exterior. 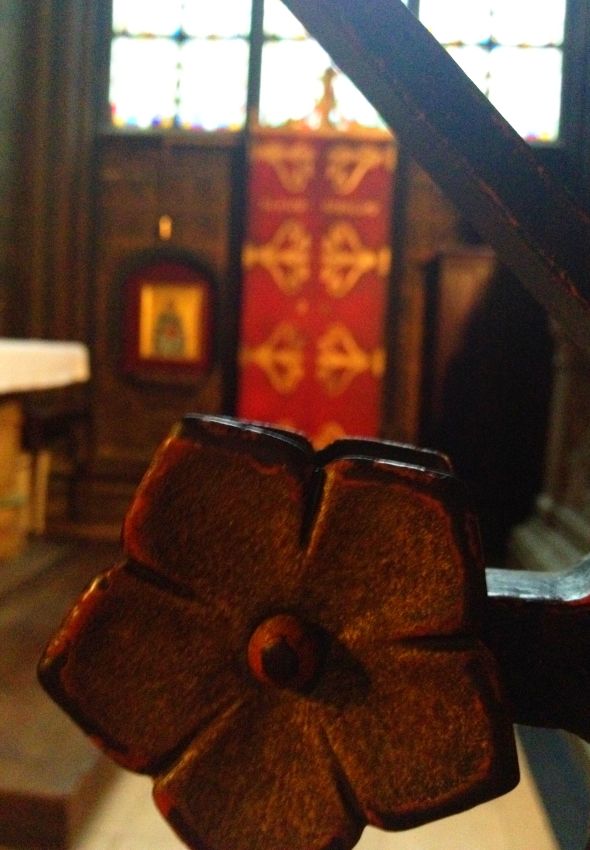 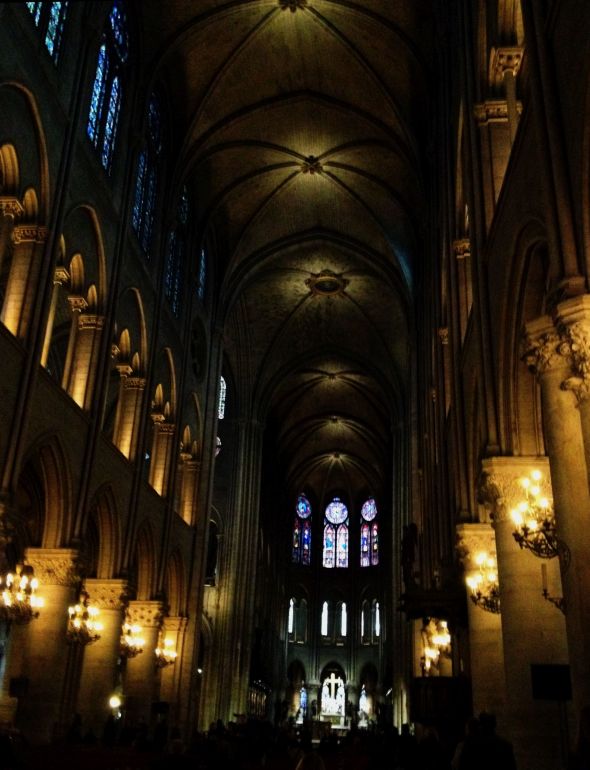 The cathedral was essentially complete by 1345. The cathedral has a narrow climb of 387 steps at the top of several spiral staircases; along the climb it is possible to view its most famous bell and its gargoyles in close quarters, as well as having a spectacular view across Paris when reaching the top.

In 1160, because the church in Paris had become an attraction for the kings of Europe, Bishop Maurice de Sully decided that the previous Paris cathedral, Saint-Étienne, which had been founded in the 4th century, was unworthy of its role. To begin the construction of the new Cathedral, the bishop had several houses demolished and had a new road built in order to transport materials for the rest of the cathedral. Construction began in 1163 during the reign of Louis VII. The construction of the choir took from 1163 until around 1177 and the new High Altar was consecrated in 1182 (it was normal practice for the eastern end of a new church to be completed first, so that a temporary wall could be erected at the west of the choir, allowing the chapter to use it without interruption while the rest of the building slowly took shape). Between 1210 and 1220, the fourth architect oversaw the construction of the level with the rose window and the great halls beneath the towers.

The Cathedral has been damaged many times: in 1548 by rioting Huguenots, in 1793 during the French Revolution and the worst during the Second World War. Several of the stained glass windows on the lower tier were hit by stray bullets. These were replaced after the war with new modern geometrical pattern stained glass, not the old scenes of the Bible.The cathedral has been even used at some point as a warehouse for food storage.

In 1991, a major program of maintenance and restoration was initiated, which has included the cleaning and restoration of old sculptures. The lighting was upgraded to LED lighting.

Though several organs were installed in the cathedral over time, the earliest ones were inadequate for the building. The organ used now has 7,374 pipes, with ca 900 classified as historical. It has 110 real stops, five 56-key manuals, and a 32-key pedal board. The position of titular organist (“head” or “chief” organist) at Notre-Dame is considered one of the most prestigious organist posts in France. It was reminiscent of the 18th-century practice of the cathedral having four titular organists, each one playing for three months of the year.

The cathedral has 10 bells. The largest, Emmanuel, original to 1681, is located in the south tower and weighs just over 13 tons and is tolled to mark the hours of the day and for various occasions and services. In early 2012, the four old bells in the north tower were deemed unsatisfactory and removed. A set of 8 new bells was cast by the same foundry in Normandy that had cast the four in 1856. At the same time, a much larger bell called Marie was cast in the Netherlands—it now hangs with Emmanuel in the south tower. The 9 new bells, which were delivered to the cathedral at the same time (31 January 2013), are designed to replicate the quality and tone of the cathedral’s original bells.

1185: Heraclius of Caesarea calls for the Third Crusade from the still-incomplete cathedral.
1239: The Crown of Thorns is placed in the cathedral by St. Louis during the construction of the Sainte-Chapelle.
1302: Philip the Fair opens the first States-General.
16 December 1431: Henry VI of England is crowned King of France.
1450: Wolves of Paris are trapped and killed on the parvis of the cathedral.
7 November 1455: Isabelle Romée, the mother of Joan of Arc, petitions a papal delegation to overturn her daughter’s conviction for heresy.
1 January 1537: James V of Scotland is married to Madeleine of France
24 April 1558: Mary, Queen of Scots is married to the Dauphin Francis (later Francis II of France), son of Henry II of France.
18 August 1572: Henry of Navarre (later Henry IV of France) marries Margaret of Valois. The marriage takes place not in the cathedral but on the parvis of the cathedral, as Henry IV is Protestant.
10 September 1573: The Cathedral was the site of a vow made by Henry of Valois following the interregnum of the Polish–Lithuanian Commonwealth that he would both respect traditional liberties and the recently passed religious freedom law.
10 November 1793: the Festival of Reason.
2 December 1804: the coronation ceremony of Napoleon I and his wife Joséphine, with Pope Pius VII officiating.
1831: The novel The Hunchback of Notre-Dame was published by French author Victor Hugo.
18 April 1909: Joan of Arc is beatified.
16 May 1920: Joan of Arc is canonized.
1900: Louis Vierne is appointed organist of Notre-Dame de Paris after a heavy competition (with judges including Charles-Marie Widor) against the 500 most talented organ players of the era. On the 2nd of June 1937 Louis Vierne dies at the cathedral organ (as was his lifelong wish) near the end of his 1750th concert.
26 August 1944: The Te Deum Mass takes place in the cathedral to celebrate the liberation of Paris. (According to some accounts the Mass was interrupted by sniper fire from both the internal and external galleries.)
12 November 1970: The Requiem Mass of General Charles de Gaulle is held.
6 June 1971: Philippe Petit surreptitiously strings a wire between the two towers of Notre-Dame and tight-rope walks across it. Petit later performed a similar act between the Twin Towers of the World Trade Center.
31 May 1980: After the Magnificat of this day, Pope John Paul II celebrates Mass on the parvis of the cathedral.
January 1996: The Requiem Mass of François Mitterrand is held.
12 December 2012: The Notre-Dame Cathedral begins a year-long celebration of the 850th anniversary of the laying of the first building block for the cathedral. 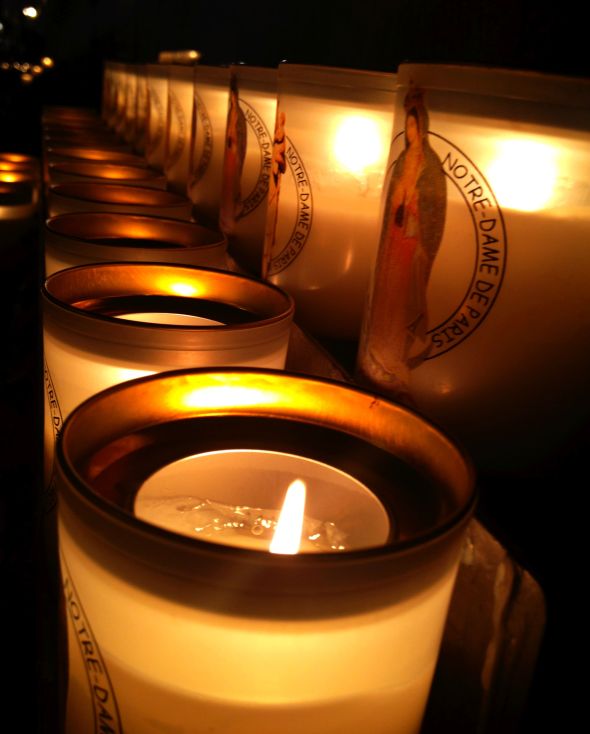 The Cathedral is open every day of the year: Monday to Friday from 8:00 am to 6:45 pm and Saturdays and Sundays from 8 am to 7:15 pm. The access to the cathedral is open and free.